Trigeminal Neuralgia (TN) is a brief, excruciating and perhaps the most severe pain known to man affecting the hemifacial region. It occurs mainly due to tortuous vessel compressing the trigeminal nerves, though in many cases, the exact etiology and pathogenesis remain undetermined. The first line therapeutic option for patients affected by TN is the medical line of management and patients refractory to the same, are offered various invasive procedures like balloon compression, gamma knife surgery, radiofrequency ablation, etc. In this paper, we present percutaneous management of the pain by injecting neurolytic drugs in the foramen ovale under Computed Tomography (CT) guidance as the new and promising technique of treatment in TN.


To evaluate the efficacy and safety of Computed Tomography guided percutaneous management of pain in trigeminal neuralgia using neurolytic drugs.


Trigeminal Neuralgia is also known as tic douloureux, a term given to this painful disease by Nicolaus Andre in 1756 [1] . TN is a pain which typically is intense, brief, usually unilateral, recurrent shock like involving the branches of fifth cranial nerve [2]. It can be mainly classified into two types. First being, the classical TN (Type I), which is due to neurovascular compression, the most common vessel causing the same being superior cerebellar artery followed by anterior inferior cerebellar artery [3]. Second type is atypical TN (Type II), secondary to causes like trauma, tumor, multiple sclerosis or herpetic infections. The distinction between these two types is mainly based on clinical symptoms [4, 5] as Type I pain is episodic in nature whereas Type II pain is more constant. TN is often called by many as “the suicide disease” [6] as the patients who suffer from it would rather take their lives than bear the pain.

The initial line of treatment for TN is medical management by drugs like Carbamazepine, Gabapentin, Oxcarbazepine among others. Patients of type I TN may also be advised microvascular decompression. Those patients who do not respond or have contraindications to the above mentioned drugs or experience no change in the intensity of the pain are called Refractory TN [7]. Such patients are advised invasive procedures like trigeminal nerve block neurolytic block, radiofrequency ablation, gamma knife surgery and balloon compression.

We describe our experience in percutaneous management of pain by injecting neurolytic drugs in the foramen ovale under CT guidance in six patients, suffering from TN.


The pre procedural work up included clinical evaluation and thorough reading of the Magnetic Resonance Imaging (MRI) scans of all the patients to rule out any neurovascular conflict. Any patient with neurovascular conflict was considered an exclusion criterion in our study. These patients were reported taking the drugs for TN for over three months with no improvement in the pain. The pain score evaluation was done using Numeric Rating Scale [8] and Wong-Baker Faces Pain Rating Scale [9] as a baseline evaluating point to be compared to the same scoring system after the procedure. Routine investigations such as coagulation profile, liver function test, renal function test, HIV and HbsAg were done before the procedure.


Patients rate pain on a number scale from 0-10, 0 being a depiction for no pain and 10 being the worst pain imaginable.


The Wong-Baker Faces Pain Rating Scale is a pain scale that was developed by Donna Wong and Connie Baker. The scale shows a series of faces ranging from a happy face at 0 (No Pain) to a crying face at 10 (Worst Pain Possible). The patient must choose the face that best describes how they are feeling.

In our study, we use the Wong Bakers scale to assess the patients’ pain before and after the procedure.

The patient was put in the supine position with head placed in reverse occipitomental position (chin up and neck extended), turned 30° to the opposite side of the block. The foramen ovale was identified under CT guidance and a virtual track was made starting from a point which was 2-3cms lateral to the angle of mouth on the skin to foramen ovale (Figure 1). Once the trajectory of the needle and the foramen ovale was confirmed on CT scan, the skin at the point of entry was infiltrated by 2ml of 2% xylocaine using a 25G needle. Then, a 22G spinal needle was inserted at the same point and aimed in the direction of planned trajectory towards the foramen ovale (Figure 2). To prevent the needle from entering the oral cavity, a finger from inside the mouth can be used to guide the same [10]. Though, we did not apply this in any of our patients.

Following this, negative aspiration was attempted to check for Cerebro Spinal Fluid (CSF) or blood aspirate. If the aspirate contained CSF or blood then the needle had to be readjusted. Then 0.5ml of mixture made from 1ml of iohexol and 2ml of 2% xylocaine was injected into the target site in order to check the spread of injectant and exact needle tip position. Once the tip of the needle touches the mandibular nerve root, the patient might complain of the exact similar pain which he/she has been suffering, thus confirming the accurate needle tip location. This injectant acts as a diagnostic block if the trigeminal ganglion is the pain generator with xylocaine providing anesthesia prior to alcohol injection.

A mixture containing 3ml of 100% alcohol, 1ml of iohexol and 1 ml of saline was made. Of this 1ml of the mixture was injected into the foramen ovale (Figure 3 and 4). Post procedure check scan was performed to rule out any complication.


Exact position of the needle tip in the foramen ovale was seen in all the six patients thus achieving 100% technical success. All these patients achieved a significant level of relief with an average pain score of two immediately after the procedure. Twenty four hours after the procedure, they rated their reduction of pain at an average pain score of one.

Four out of the six patients ie Patient No. 1, 2, 4 and 6 were completely relieved of their pain with one year follow up without taking any medication.

In Patient No. 3, the procedure was abandoned as during the diagnostic block, the injectant was seen tracking into CSF cistern and fourth ventricle.

Patient No. 5 reported with a similar pain of TN within three months with a pain score of five, little less than the pre-procedure pain score of six. The pain was more severe in the pterygopalatine segment, hence a pterygopalatine block was carried out and the patient had a pain score of one twenty four hours after the procedure. Hence, the initial trigeminal neurolysis was partially successful in this patient.

No post procedural complication was seen in any of our patients. 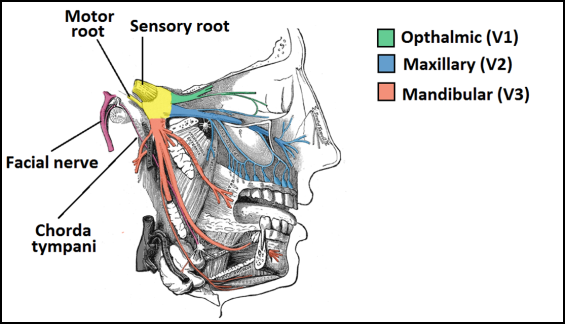 The reported annual incidence rate of TN is about 4.5 per 100,000 persons [11] but the actual figures may be even much higher because of diagnostic challenges associated with the disease. TN is more common in females than males with a ratio of 3:2 and is usually seen after 50 years of age [11].

Trigeminal nerve block is an upcoming treatment in TN patients who are refractory to medical line of management. It relieves the pain and also reduces the side effects of drugs which are used for the treatment. Earlier studies were mainly done using x-ray or fluoroscopic guidance which had its own limitations in terms of image quality and two dimensional views. In contrast to this, CT scan provides excellent and direct visualization of foramen ovale leading to correct placement of needle [12] and thus scoring over fluoroscopy. This reduces the chances of injecting neurolytic agents at improper locations and thereby reduces the side effects.

In our cases, initial check CT scan was done by injecting 1ml of iohexol to determine whether the needle is in exact location. This doubly ensured us about the location as well as the spread of injectant. This was different from previous studies done using fluoroscopy where a diagnostic block using xylocaine had to be given in order to confirm the location of the needle tip.

We used a mixture of 3ml of 100% alcohol, 1ml of iohexol and 1ml of saline for trigeminal neurolysis however, Han et al stated that trigeminal nerve block with high concentration of lidocaine (10%) is capable of achieving an intermediate period of pain relief, particularly in patients with lower pain and shorter duration of pain prior to the procedure [13].

Alcohol spreads easily and should be used cautiously. The other agents which can be used but were not used in our study are phenol and glycerol.

The side effects that may follow the procedure are numbness and hypoesthesia in the entire trigeminal nerve distribution. There can be abolition of corneal reflexes which can produce exposure keratitis and dryness of eyes. Improper injection of alcohol into CSF space can lead to arachnoiditis/ meningitis. 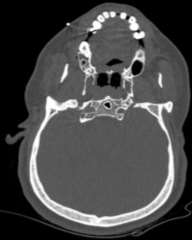 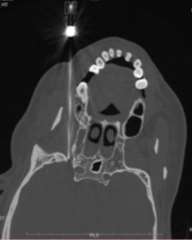 Fig 1: Site marked for needle Fig 2: Tip of the needle in foramen 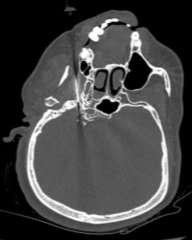 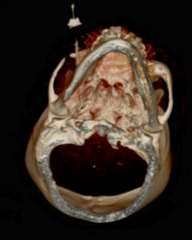 
This eighty year old male came with complains of left sided trigeminal neuralgia. He had been taking carbamazepine for four months with no change in pain intensity. The procedure had to be abandoned as after injecting the diagnostic block, the injectant was seen tracking into the CSF cistern in the cerebello pontine angle and fourth ventricle (Figure 5). 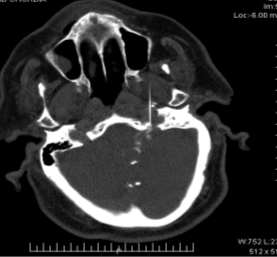 
This forty seven year old female came with complains of right sided trigeminal neuralgia. She had been taking carbamazepine for three months without any relief in pain. MRI scans showed no neurovascular conflict. The procedure was successful with pain score of one immediately after and at twenty four hours after the procedure (Figure 6). However, this patient came back within three months of the procedure complaining of pain, which was more in the pterygopalatine segment. A pterygopalatine block was done with resultant pain score of one at twenty four hours after the procedure and two at nine months of the procedure. Hence, this patient showed partial response to trigeminal neurolysis carried out initially. 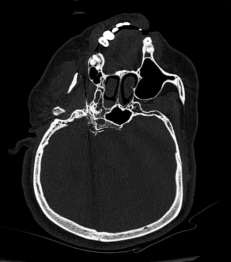 Fig 6: CT scan showing the tip of the needle in right foramen ovale.


Percutaneous injection of alcohol, iohexol and saline mixture at the verge of foramen ovale under CT guidance is an effective and promising method to relieve pain in patients of TN refractory to medical line of management. This technique is inexpensive, cost effective and a relatively painless procedure. Being a minimally invasive technique, the chances of any infection and other post operative complications are less. Since our study involved only six patients, this technique needs to be further evaluated on a large sample size to substantiate the result of this procedure. Having said the above, we would like to emphasize that our initial experience of this procedure was quite impressing.

Looking for a similar assignment? Get help from our qualified experts!

Need help with your homework?